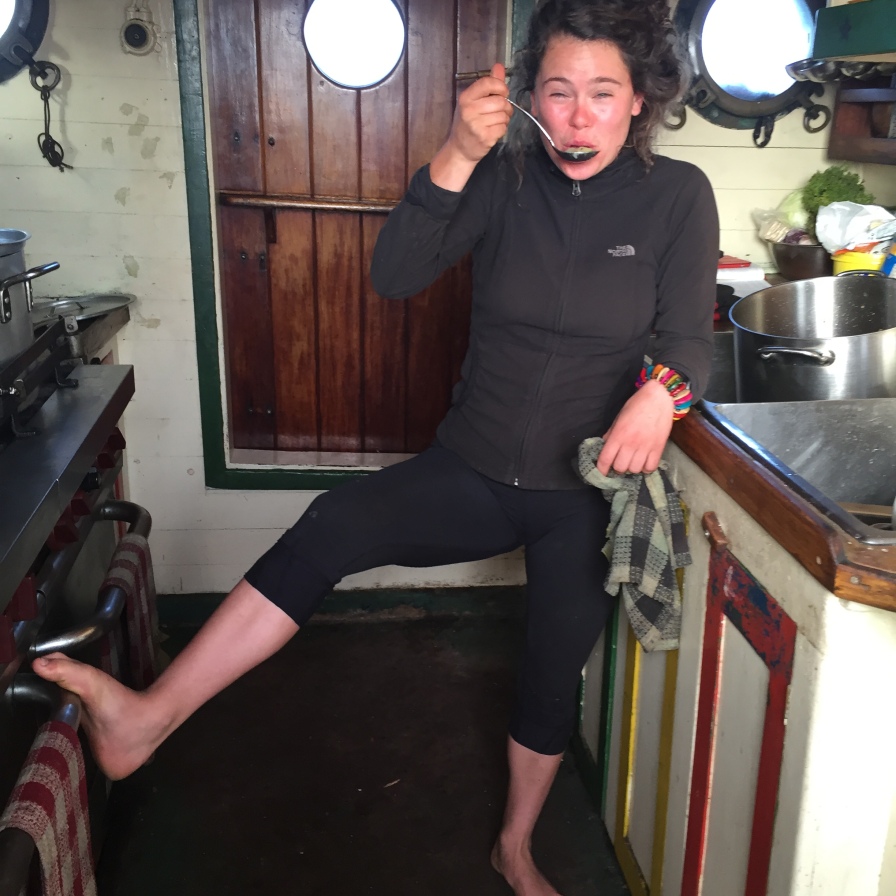 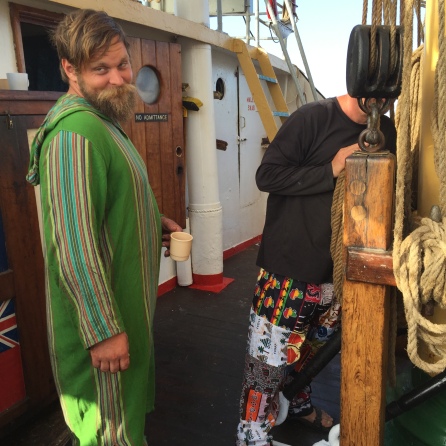 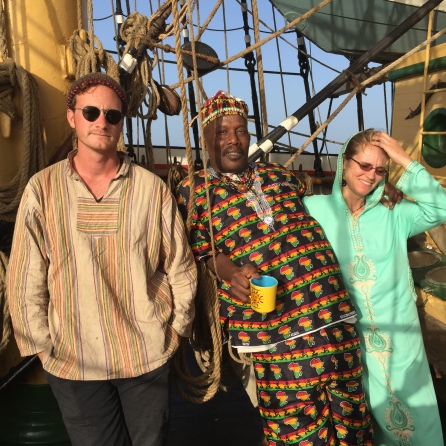 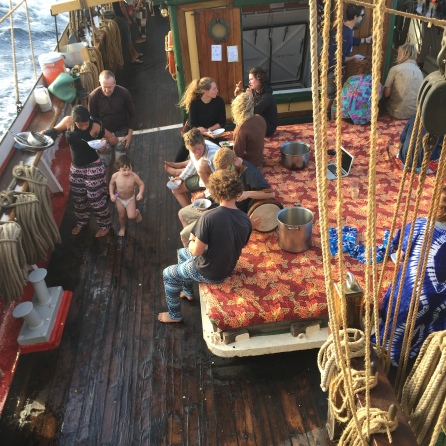 Back to sea. We were supposed to leave at 9, however the Captain was invited to a thank you ceremony. The ship delivered books in French, that had been donated in Canada, to a local school.
We were all on standby and getting the ship ready all day, practicing emergency drills.
Finally we were off and back to sailing.

I got up at at 11:30pm for my 12 o’clock watch and I felt terrible. Sea sickness. I wasn’t ill, just felt off balance and very queasy. I managed my watch, which was very quiet, even stood at the helm for an hour. Had to get someone to fill in the ships log for me though. The thought of writing in a small cabin was to much for me.
I was Ok laying down in my bunk, then felt rubbish again when I got up. Had a quiet day watch, I sewed leather onto the rowing boat oars. The leather was soaked and trimmed before sewing tightly with waxed cotton. The purpose of this is to protect the oars where they rest on the oar locks during rowing. The concentration of the project helped me feel better.

I felt a bit silly at first, seasickness seemed a bit embarrassing, however, lots of us are suffering, some more than others. Even the ships cat is being strange. We have a swell, that is moving the ship front to back as well as at an odd diagonal angle.A constant roller coaster. Even hardened sailors are being affected.

BIG NEWS.
the desalinator has stopped working. We are not making fresh water. Result, we can only use the water we have for drinking and cooking. NO Showers.

I am still full of dust from Dakar, and we seem to just get dirty on all the jobs on board. We are all going to smell together. Hanna and I had got a bucket of sea water(no shortage of that) and washed our hair. We also obtained permission to use 3 cups of fresh water each for a final rinse. Baby wipes will have to do for the time being.

Sunday at sea.
I have been put on scullery with the other Hanna (we have two) and Hayley. It’s Donald’s day off so we have to cook.
Lunch. Moroccan spiced, coconut fish curry with rice.
Dinner. Roast chicken, potatoes, onions and garlic with salad. Well nearly, one of the ovens wouldn’t light so we put it all in a massive pot and made a stew.

The ship had an African party with fruit punch and popcorn. We played Senegalese music and dressed in clothes that we bought in Dakar. Very bright and relaxed. (New clothes hiding the grime.)

No night watch for me as I have been on scullery. the sea has gotten rougher and the winds have picked up. Thankfully I am feeling better now, No more queasiness.

Clocks have moved back an hour. Crossing time zones.

Today has been a mixed bag of work. Learning new things, repairing the straps that we walk on when climbing the rigging. Covering everything in a tar and oil mixture. Getting covered myself.
Water splashing over the decks from time to time accompanied by the occasional yell as someone gets a soaking. The sea is quite warm though. Two Mahi Mahi (I think that’s what they are called) fish were caught today adding sudden excitement.

Tuesday.
The engines have been turned on. We were due under the current conditions to reach Sao Vincent, Cape Verde at about 6pm. We are giving ourselves a boost so that we can drop anchor in the daylight.
I was on lookout again as we came into port. It’s hazy and small yachts keep popping up out of nowhere.
Finally at anchor in the harbour at 4:30pm.
We are all sent up the rigging to store the sails. The sails have been pulled up, however, they are then tidied up with no loose ends and pulled onto and tied to the yards.
I remember the first time seeing this, watching everyone climbing, looking like ants, disappearing from the deck as all go aloft. Now I’m one of them. It’s great up there all working together, looking down on the ship.

BIG NEWS.
The water maker is working. Those going ashore tomorrow are allowed to shower.
I’m on watch tomorrow so one more day to smell.

Wednesday.
The ship seemed to empty at lunch time as the crew had all been ‘cleared in’ and gone ashore.

Those of us on watch got to the serious business of rust busting. Moving everything that was on the breeze way, unlashing and moving all the propane bottles and relashing them elsewhere.
Then we donned ear plugs and got to hammering out the rust that starts to build up along the side rails. Very noisy work but quite good fun as we are all working together in a group. This is a full, ongoing, restoration project so the work we do is to keep the ship in the best possible condition.

Finished work at 5, a long hard day. Then we had an educational hour. Dan (2nd mate) gave us all a lesson on anchors. He is not a teacher, but he was so funny, drawing pictures to explain how everything works. Learnt loads from him, made the subject of anchors very entertaining.

Dinner at 6, scullery cleaning by the whole watch then YES YES YES, I finally got to shower.

Wednesday.
8:30am. On the skiff with 9 others all with sackfuls of laundry

Dropped of the washing, I explained to the lady that we were a ship of 40 and we had a lot of dirty clothes. She would be very busy for a few days.

I feel very comfortable here. There are various languages spoken, but predominately Portuguese. I am so pleased how easy I am finding it to communicate.
This is so different from Dakar. Quiet and laid back. No one hassling you.
We were all so excited to get ashore. We ate breakfast, wandered round aimlessly, had lunch then all felt so tired.
I have checked into a hotel, Fancy a proper shower, get some time to catch up with family at home.

Staying here for about six days so will have 4 days off in total to explore. Also to provision up for the next sailing leg.